Racing games are fun to play. It is also one of the popular games in the industry, so there is no wonder why there are various racing games in Steam! But in this article, we have rounded up the 10 best Steam racing games so far this year for all you guys to enjoy.

BattleSky VR is one of the best racing games available in Steam! Why? Because it’s a Multiplayer VR flying first-person shooter at its core. Moreover, it brings an Overwatch style gameplay to the VR platform. In addition, each player picks a Hero with vastly different size, powers and gameplay style to engage in fast-paced aerial combats against other players.

Love platform games? You may think this is a simple game just like the ones you play with… But this just might be the hardest platform game has ever been made. The hard part of the game is the impossibility of making 100 bounces. No one can make 100 bounces in this game… But are you willing to try?! LOL.

In addition, this game has prepared bad surprises for you. There are also bonuses, but for what? You never know what the game really wants to do. The thing is, simplicity is not really what it looks like. It was made for those “who really wanted to experience winning.”

Furthermore, you will definitely love this game because of its minimalistic platform look with colorful graphics.

Feel the road and freedom with Kamikazo VR! You know it’s hard to resist the 2000hp, and you can steer with the help of the touch controller your motorcycle! If no touch is available, you can also use a gamepad or keyboard so this game is really convenient. The only bad thing about this game is that, unfortunately, the cars can easily explode. But they are very environmentally friendly so it’s all good!

Say hello to MegaRace 3! This game is the third entry in the ever-popular MegaRace series. Moreover, it is known to be the first truly 3D game in the series that seamlessly blends elements of futuristic racing and first-person shooters. Furthermore, with its aggressive, high-velocity, futuristic racing on the micro scale, you will definitely get hooked to this game!

Welcome to Neon Seoul where a new breed of rebel has emerged, and they are called the OutRunners. These rebels weave through seas of automated vehicles, and operating off the grid. Moreover, these rebels risk their lives on hoverbikes built for insane speeds.

Nirvana Pilot Yume is the cure for your ‘80s sci-fi anime nostalgia because it is the perfect retro-synthwave world! This world comes with space races inspired by the DOS classic SkyRoads. Moreover, it has a steamy visual novel of romance and redemption. Rise the volume and turn on the neon lights because you are now entering the year 3080.

A unique combination of space and racing sims is what awaits you on Orbital Racer. We love this because it gives a very futuristic vibe and the gameplay is really great. Moreover, you can choose between fast-paced, explosive action or more realistic simulation where drifting around every corner becomes more than just a gimmick—it’s a necessity. Furthermore, you can race around distinct locations such as the rings of Saturn or orbital city on Venus! Sounds cool, huh?

This game is unlike the others because it’s more of a chill, yet fun game to play! However, it does challenge you by exercising your knowledge on Physics. But even if you’re not all that about the law of Physics, just prepare yourself to destroy the enemy and perform steep stunts on different wheelbarrows killing games. Get to the finish line alive or dead, and win the fight with the strongest! 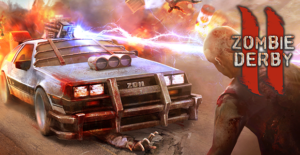 Last but not the least is Zombie Derby 2. This game is part of our 10 best racing games on Steam because it involves discovering the dangerous post-apocalyptic world with cool upgradable cars! Moreover, it has millions of blood-thirsty zombies of different kinds, and mass destruction of the undead. However, do take note that there are bloody massacre in real 3D. But if you’re up for that, well you’re in luck because it offers a full HD gameplay and playable at 60fps!