Since it’s more than a decade since Nokia discontinued producing its iconic 3310 model. But, waiting no more as Nokia 3310 spotted at MWC 2017 and made its launched of the upgraded Nokia model 3310. Everyone on the event were overwhelmed and love the new Nokia model.

As long as we can remember, the Nokia’s original 3310 was well known on its long life battery and the customize casing. Those characters are kept and upgraded as the new model measures 12.88mm thick and very light weight of 79.6g, which is more slimmer and lighter than the old one. It has 2.4 inch screen with 320 x 240 pixel resolution and a sleek frame. Still, the battery last with a month battery life and 22 hours talking time.

Wait, there’s more! Of course, Nokia 3310 comeback won’t be completed if its well-known game won’t be featured. Yes! Snake is also back!

Other basic features that you’ll surely amaze are the FM Radio, voice recorder and a basic web browser which do have a limited functionality. It also has a 2 MP camera for photos and video recording. Nokia 3310 has also Bluetooth 3.0 functionality and it may have a dual SIM tray. Other than that, Nokia 3310 don’t have the capability for WIFI connections and GPS. 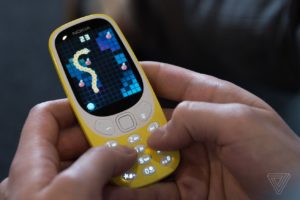 But then, half of the world won’t be able to experience this.  Since 3310 still be using 2G frequencies it won’t be working at some part of the world, especially US and CANADA.

Aside of these countries, Canada, Australia, Switzerland, Taiwan and US have turned off most of their 2G networks. Therefore, it will be working only to those part of the world who supports GSM 900 MHz and 1800 MHZ which are available in most parts of Europe, Africa, the Middle East and Asia.

As of today, the expected released date may be in Q2 (April-June).  And aside of Nokia 3310, we will be expecting as well the release of Samsung Galaxy 8 and iPhone 8.